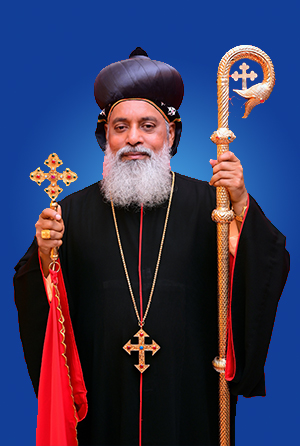 Most Rev. Dr. Yoohanon Mar Theodosius (born 08 April 1959) is the Metropolitan Bishop of the Eparchy of Muvattupuzha of the Syro-Malankara Catholic Church. John was born to Philipose Oonnoonney and Late Mrs. Chinnamma. Having completed his school education, he joined the St. Aloysius Minor Seminary, Trivandrum. He completed his philosophical and Theological studies from St. Joseph’s Pontifical Seminary, Alwaye. He was ordained priest by Archbishop Benedict Mar Gregorios on December 22, 1985. After his ordination, he served as secretary to His Grace Archbishop Benedict Mar Gregorios till 1992. Meanwhile he also served as the notary of the Archdiocesan marriage tribunal.

From 1998 to 2010 he was the Chancellor of the Major Archdiocese of Trivandrum. During this time he also served as the Rector of St. Aloysius Minor Seminary, Trivandrum (till 2006). He had been the Vice-Chancellor of the Major Archiepiscopal Curia for eight years. He also worked as the General Coordinator of the Formulation of the Particular Laws of the Syro-Malankara Catholic Major Archiepiscopal Church (CPCSMCC). He was first Rector of St. Mary Queen of Basilica, Trivandrum, the first Basilica in the Syro-Malankara Catholic Church. In 2010 he was appointed the Rector of St. Mary’s Malankara Major Seminary Trivandrum. On 2014, he was appointed the Core-team member cum coordinator of Catholic Bishop’s Conference of India (CBCI). From 2015-2016 he served as the Vicar General and Chancellor of the Diocese of Gurgaon. In 2016 he was appointed as the Vicar General and Chancellor of the Major Archdiocese of Trivandrum. He has written several lyrics and books both in English and Malayalam.

On 5th August 2017, he was appointed the Curia Bishop of the Syro Malankara Catholic Church and Apostolic Visitator to Europe and Oceania. Moran Mor Baselios Cardinal Cleemis Catholicos ordained him Bishop on 2017 September 21 at Mar Ivanios Nagar, Adoor (during Re-union Celebrations). On 10 April 2018 he was appointed as the Co-adjutor Bishop of the Eparchy of Muvattupuzha and took charge of the office on 12 April 2018. On 12 June 2019 he was installed as the bishop of Muvattupuzha at St. Joseph’s Cathedral Muvattupuzha.